Being sensitive souls, I’m sure we all marvel at the beauty of choral music. The power of a group of fine voices achieving critical mass sends shivers down the spine. And none more so than The Chorus of the Hebrew Slaves from Verdi’s opera Nabucco. Pleasure on the way to paradise it is. Play loud, sing along and have a listen here.

It sounds lovely in Italian and translates thus… 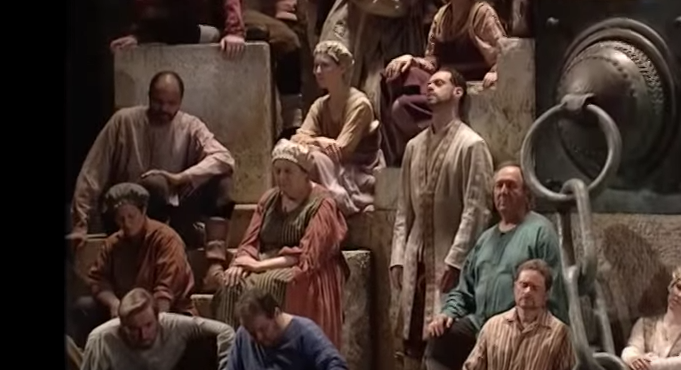 Fly, thought, on wings of gold, go settle upon the slopes and the hills where the sweet airs of our native soil smell soft and mild!

Greet the banks of the river Jordan and Zion’s tumbled towers.

Oh, my country, so lovely and lost!

Oh remembrance so dear yet unhappy!

Golden harp of the prophetic wise men, why hang so silently from the willows?

Rekindle the memories in our hearts, tell us about the times gone by!

Remembering the fate of Jerusalem play us a sad lament or else be inspired by the Lord to fortify us to endure our suffering!

Something lost in the translation, I suspect, but a useful addition to the kitbag none the less.

Anyway, fortify us indeed to endure our suffering. For suffer we did on Saturday in a perplexing encounter at Guys’ Cobham ground, now so sadly colonised by Chelsea FC, and so sadly no longer the rugby experience it once was. Guys, struggling to field numbers, were grateful for the assistance of not just one or two, but six of our players.

And we never got above first gear. Struggled. Match Of The Day Highlight: The Challice inadvertently knocking Thorners’ head clean off his shoulders while he ferreted out a ruck.

“And on my sodding feet I was too,” said an irate man with no head later.

Other oddments included some fool in the front row badly executing a box kick (back to Flossie for the naked electro convulsion therapy me thinks) and the gifting of their try which redefined for all time the parameters of the term “tosspottery”.

We managed  a decent pushover try, after which the scrums inevitably went uncontested and later Big Gav scuttled over for a front row score and Lord Greed sealed it with a bullish canter and sidestep over the whitewash to keep the score respectable.

Headless Gerbil persisted in wasting overlaps with his insatiable appetite for running into trouble. And we had to change the line-out calls because half the oppo pack knew what we were doing. Scud, of course, adapted to the new line out calls like a sheep learning to speak penguin for the first time.

“Call whatever you like Scud, but 8 is the trigger number so if you want it to go to the No2 or No3 jumper (ie the front) the call will be 6478…then say 2 or 3,” explained The Challice nice and simply.

Not long after that we were enjoying a phenomenally long walk back to the changing rooms. Sadly no bar, so a swift exit. Sad really. The world’s oldest club deserves better.

Other memories are of The Juggler falling on his arse under a bouncing ball, though not dropped this time. And finding at every, single sodding turn, the The Count and Buzz in our faces. That’ll be the last time they get lent to the oppo.

Anyhow, enough of that. Our thoughts and best wishes are with Comrade Tap who has recently undergone surgery for the troublesome shoulder hinge that has been plaguing His Grace for some while. No, not to sort the patented “Give me a moment and I’ll just put my own dislocated shoulder back in its socket aaarghyyyyaaaaarrgh” business, but rather the mild discomfort he’d encountered fetching down the rarer vintages from the higher shelves of the cellar.

While we await news of his recovery and rehabilitation, I understand he’s been reliant on the daily arrival of an emergency visiting syrup wagon to dispense first class assistance at a very difficult time for the big man. So difficult in fact that, unable to groom himself to perfection, he elected to shave off the talismanic mane a la Britney and favour a rug which apparently makes him, in a certain light, look a little like Wolfie Snr but better smelling..

The Challice suggests Tap might like to take the depilatory process further. His own recent “back, sack and crack” had been a spectacular success.

“Not a clinker in sight, I’ll bet,” said Kinger. “Too right,” smiled The Challice, “the chod now leaves the space capsule at Mack 1.” Tap, he mused, with time on his hands, and morphine still in his system, might find it an amusing way to kill a couple of hours.

Golden harp of the prophetic wise men, why hang so silently from the willows?

You may well ask.

NEXT: 5. The Wrong Changing Room    Previous: 3. The Young Herberts